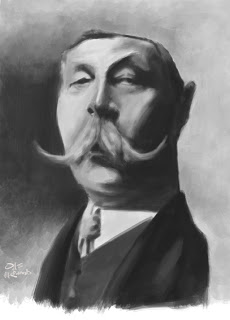 "Mediocrity knows nothing higher than itself, but talent instantly recognizes genius."

"Men scorn what they don't understand."

"To a great mind, nothing is little."

"It has long been an axiom of mine that the little things are infinitely the most important."

"An exception disproves the rule."

"When the impossible has been eliminated, whatever remains, no matter how improbable is possible."

"How often have I said to you that when you have eliminated the impossible, whatever remains, however improbable, must be the truth?"

"You see, but you do not observe. The distinction is clear. "

"It's a wicked world, and when a clever man turns his brains to crime, it is the worst of all."

"There is nothing more deceptive than an obvious fact."

"When you have eliminated the impossible, that which remains, however improbable, must be the truth."

"There is nothing as deceptive as an obvious fact."

"`I am inclined to think -' said I. `I should do so,' Sherlock Holmes remarked impatiently."

"By George!’ cried the inspector. ‘How did you ever see that?’ ‘Because I looked for it.’"

"‘By the way, Doctor, I shall want your cooperation.’ I shall be delighted.' 'You don't mind breaking the law?' 'Not in the least.' 'Nor running a chance of arrest?' 'Not in a good cause.' 'Oh, the cause is excellent!' 'Then I am your man.' 'I was sure that I might rely on you.’"

"‘Do you know, Watson,’ said he, ‘that it is one of the curses of a mind with a turn like mine that I must look at everything with reference to my own special subject. You look at these scattered houses, and you are impressed by their beauty. I look at them, and the only thought which comes to me is a feeling of their isolation and of the impunity with which crime may be committed there.’"

"‘I wonder!’ said he, leaning back and staring at the ceiling. ‘Perhaps there are points which have escaped your Machiavellian intellect. Let us consider the problem in the light of pure reason.’"

"What the deuce is it to me?’ he interrupted impatiently: ‘you say that we go round the sun. If we went round the moon it would not make a pennyworth of difference to me or to my work.’"

"‘I carry my own church about under my own hat’, said I. ‘Bricks and mortar won't make a staircase to heaven. I believe with your Master that the human heart is the best temple.’"

"‘What a lovely thing a rose is!’ He walked past the couch to the open window and held up the drooping stalk of a moss-rose, looking down at the dainty blend of crimson and green. It was a new phase of his character to me, for I had never before seen him show any keen interest in natural objects. There is nothing in which deduction is so necessary as religion, said he, leaning with his back against the shutters. It can be built up as an exact science by the reasoner. Our highest assurance of the goodness of Providence seems to me to rest in the flowers. All other things, our powers, our desires, our food, are all really necessary for our existence in the first instance. But this rose is an extra. Its smell and its color are an embellishment of life, not a condition of it. It is only goodness which gives extras, and so I say again that we have much to hope from the flowers."

"1. Knowledge of Literature: Nil. 2. Knowledge of Philosophy: Nil. 3. Knowledge of Astronomy: Nil. 4. Knowledge of Politics: Feeble. 5. Knowledge of Botany: Variable. Well up in belladonna, opium, and poisons generally. Knows nothing of practical gardening. 5. Knowledge of Geology: Practical but limited. Tells at a glance different soils from each other. After walks has shown me splashes upon his trousers, and told me by their color and consistence in what part of London he had received them. 7. Knowledge of Chemistry: Profound. 8. Knowledge of Anatomy: Accurate but unsystematic. 9. Knowledge of Sensational Literature: Immense. He appears to know every detail of every horror perpetrated in the century. 10. Plays the violin well. 11. Is an expert singlestick player, boxer, and swordsman. 12. Has a good practical knowledge of British law."

"A dog reflects the family life. Whoever saw a frisky dog in a gloomy family, or a sad dog in a happy one? Snarling people have snarling dogs, dangerous people have dangerous ones."

"A client is to me a mere unit, a factor in a problem."

"A fine thought in fine language is a most precious jewel, and should not be hid away, but be exposed for use and ornament."

"A change of work is the best rest."

"A good soldier in an enemy's country should everywhere and at all times be on the alert. It has been one of the rules of my life, and if I have lived to wear grey hairs it is because I have observed it. And yet upon that night I was as careless as a foolish young recruit who fears lest he should be thought to be afraid."

"A fine horse or a beautiful woman, I cannot look at them unmoved, even now when seventy winters have chilled my blood."

"A gruff murmur from the others showed that they were of one mind with the prince. The light of the torches from the walls beat upon the line of stern faces at the high table. They had sat like flint, and the Italian shrank from their inexorable eyes. He looked swiftly round, but armed men choked every entrance. The shadow of death had fallen athwart his soul."

"A great brain and a huge organization have been turned to the extinction of one man. It is crushing the nut with the trip-hammer--an absurd extravagance of energy--but the nut is very effectually crushed all the same."

"A hound it was, an enormous coal-black hound, but not such a hound as mortal eyes have ever seen. Fire burst from its open mouth, its eyes glowed with a smoldering glare, its muzzle and hackles and dewlap were outlined in flickering flame. Never in the delirious dream of a disordered brain could anything more savage, more appalling, more hellish be conceived than that dark form and savage face which broke upon us out of the wall of fog."

"A large and comfortable double-bedded room had been placed at our disposal, and I was quickly between the sheets, for I was weary after my night of adventure. Sherlock Holmes was a man, however, who when he had an unsolved problem upon his mind would go for days, and even for a week, without rest, turning it over, rearranging his facts, looking at it from every point of view, until he had either fathomed it, or convinced himself that his data were insufficient. It was soon evident to me that he was now preparing for an all-night sitting. He took off his coat and waistcoat, put on a large blue dressing-gown, and then wandered about the room collecting pillows from his bed, and cushions from the sofa and armchairs. With these he constructed a sort of Eastern divan, upon which he perched himself cross-legged, with an ounce of shag tobacco and a box of matches laid out in front of him. In the dim light of the lamp I saw him sitting there, an old brier pipe between his lips, his eyes fixed vacantly upon the corner of the ceiling, the blue smoke curling up from him, silent, motionless, with the light shining upon his strong-set aquiline features. So he sat as I dropped off to sleep, and so he sat when a sudden ejaculation caused me to wake up, and I found the summer sun shining into the apartment. The pipe was still between his lips, the smoke still curled upwards, and the room was full of a dense tobacco haze, but nothing remained of the heap of shag which I had seen upon the previous night. 'Awake, Watson?' he asked. 'Yes.' 'Game for a morning drive?' 'Certainly.' 'Then dress. No one is stirring yet, but I know where the stable-boy sleeps, and we shall soon have the trap out."

"A long series of sterile weeks lay behind us, and here at last there was a fitting object for those remarkable powers which, like all special gifts, become irksome to their owner when they are not in use."

"A man should keep his little brain attic stocked with all the furniture that he is likely to use, and the rest he can put away in the lumber-room of his library, where he can get it if he wants it."

"A man always finds it hard to realize that he may have finally lost a woman's love, however badly he may have treated her."

"A sandwich and a cup of coffee, and then off to violin-land, where all is sweetness and delicacy and harmony."

"A strong wind sang sadly as it bent the trees in front of the Hall. A half-moon shone through the dark, flying clouds on to the wild and empty moor."

"A man loses his fortune; he gains earnestness. His eyesight goes; it leads him to a spirituality. The girl loses her beauty; she becomes more sympathetic. We think we are pushing our own way bravely, but there is a great Hand in ours all the time."

"A study in scarlet, eh? Why shouldn't we use a little art jargon? There's the scarlet thread of murder running through the colorless skein of life, and our duty is to unravel it, and isolate it, and expose every inch of it."

"A minute later the bailiff and four of his men rode past him on their journey back to Southampton, the other two having been chosen as grave-diggers. As they passed Alleyne saw that one of the men was wiping his sword-blade upon the mane of his horse. A deadly sickness came over him at the sight, and sitting down by the wayside he burst out weeping, with his nerves all in a jangle. It was a terrible world thought he, and it was hard to know which were the most to be dreaded, the knaves or the men of the law."

"A thick, black cloud swirled before my eyes, and my mind told me that in this cloud, unseen as yet, but about to spring out upon my appalled senses, lurked all that was vaguely horrible, all that was monstrous and inconceivably wicked in the universe. Vague shapes swirled and swam amid the dark cloud-bank, each a menace and a warning of something coming, the advent of some unspeakable dweller upon the threshold, whose very shadow would blast my soul."

"A trusty comrade is always of use; and a chronicler still more so."

"A wave of panic passed over the vessel, and these rough and hardy men, who feared no mortal foe, shook with terror at the shadows of their own minds."

"Accounts are not quite settled between us, said she, with a passion that equaled my own. I can love, and I can hate. You had your choice. You chose to spurn the first; now you must test the other."

"Ah, me! it's a wicked world, and when a clever man turns his brains to crime it is the worst of all."

"A woman's dream of taking it away, like a tiger cub to take away."