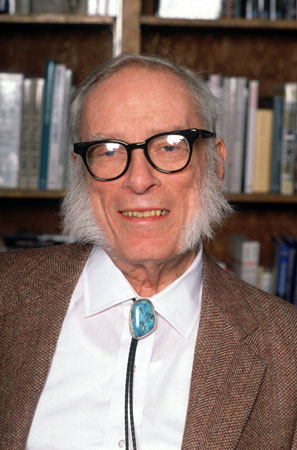 "Why this reluctance to make the change? We fear the process of reeducation! Adults have invested endless hours of learning in growing accustomed to inches and miles; to February’s twenty-eight days; to “night” and “debt” with their silent letters; to qwertyuiop; and to all the rest. To introduce something altogether new would mean to begin all over, to become ignorant again, and to run the old, old risk of failing to learn."

"Humanists recognize that it is only when people feel free to think for themselves, using reason as their guide, that they are best capable of developing values that succeed in satisfying human needs and serving human interests."

"I believe in evidence. I believe in observation, measurement, and reasoning, confirmed by independent observers. I'll believe anything, no matter how wild and ridiculous, if there is evidence for it. The wilder and more ridiculous something is, however, the firmer and more solid the evidence will have to be."

"If knowledge can create problems, it is not through ignorance that we can solve them.""

"If I were not an atheist, I would believe in a God who would choose to save people on the basis of the totality of their lives and not the pattern of their words. I think he would prefer an honest and righteous atheist to a TV preacher whose every word is God, God, God, and whose every deed is foul, foul, foul."

"To surrender to ignorance and call it God has always been premature, and it remains premature today."

"Violence is the last resort of the incompetent."

"Never let your sense of morals keep you from doing what is right."

"Suppose that we are wise enough to learn and know -- and yet not wise enough to control our learning and knowledge, so that we use it to destroy ourselves? Even if that is so, knowledge remains better than ignorance. It is better to know -- even if the knowledge endures only for the moment that comes before destruction -- than to gain eternal life at the price of a dull and swinish lack of comprehension of a universe that swirls unseen before us in all its wonder. That was the choice of Achilles, and it is mine, too."

"A subtle thought that is in error may yet give rise to fruitful inquiry that can establish truths of great value. "

"Humanity has the stars in its future, and that future is too important to be lost under the burden of juvenile folly and ignorant superstition. "

"Suppose that we are wise enough to learn and know - and yet not wise enough to control our learning and knowledge, so that we use it to destroy ourselves? Even if that is so, knowledge remains better than ignorance. "

"It is change, continuing change, inevitable change, that is the dominant factor in society today. No sensible decision can be made any longer without taking into account not only the world as it is, but the world as it will be. "

"I don't believe in an afterlife, so I don't have to spend my whole life fearing hell, or fearing heaven even more. For whatever the tortures of hell, I think the boredom of heaven would be even worse. "

"The true delight is in the finding out rather than in the knowing."

"Violence is the last refuge of the incompetent. "

"To insult someone we call him "bestial." For deliberate cruelty and nature, "human" might be the greater insult. "

"There is no belief, however foolish, that will not gather its faithful adherents who will defend it to the death."

"People are entirely too disbelieving of coincidence. They are far too ready to dismiss it and to build arcane structures of extremely rickety substance in order to avoid it. I, on the other hand, see coincidence everywhere as an inevitable consequence of the laws of probability, according to which having no unusual coincidence is far more unusual than any coincidence could possibly be."

"If I were not an atheist, I would believe in a God who would choose to save people on the basis of the totality of their lives and not the pattern of their words. I think he would prefer an honest and righteous atheist to a TV preacher whose every word is God, God, God, and whose every deed is foul, foul, foul. I would also want a God who would not allow a Hell. Infinite torture can only be a punishment for infinite evil, and I don't believe that infinite evil can be said to exist even in the case of Hitler. Besides, if most human governments are civilized enough to try to eliminate torture and outlaw cruel and unusual punishments, can we expect anything less of an all-merciful God? I feel that if there were an afterlife, punishment for evil would be reasonable and of a fixed term. And I feel that the longest and worst punishment should be reserved for those who slandered God by inventing Hell."

"To be sure, the Bible contains the direct words of God. How do we know? The Moral Majority says so. How do they know? They say they know and to doubt it makes you an agent of the Devil or, worse, a Lbr-l Dm-cr-t. And what does the Bible textbook say? Well, among other things it says the earth was created in 4004 BC (Not actually, but a Moral Majority type figured that out three and a half centuries ago, and his word is also accepted as inspired.) The sun was created three days later. The first male was molded out of dirt, and the first female was molded, some time later, out of his rib. As far as the end of the universe is concerned, the Book of Revelation (6:13-14) says: "And the stars of heaven fell unto the earth, even as a fig tree casteth her untimely figs, when she is shaken of a mighty wind." … Imagine the people who believe such things and who are not ashamed to ignore, totally, all the patient findings of thinking minds through all the centuries since the Bible was written. And it is these ignorant people, the most uneducated, the most unimaginative, the most unthinking among us, who would make themselves the guides and leaders of us all; who would force their feeble and childish beliefs on us; who would invade our schools and libraries and homes. I personally resent it bitterly."

"Knowledge is indivisible. When people grow wise in one direction, they are sure to make it easier for themselves to grow wise in other directions as well. On the other hand, when they split up knowledge, concentrate on their own field, and scorn and ignore other fields, they grow less wise — even in their own field."

"How often people speak of art and science as though they were two entirely different things, with no interconnection. An artist is emotional, they think, and uses only his intuition; he sees all at once and has no need of reason. A scientist is cold, they think, and uses only his reason; he argues carefully step by step, and needs no imagination. That is all wrong. The true artist is quite rational as well as imaginative and knows what he is doing; if he does not, his art suffers. The true scientist is quite imaginative as well as rational, and sometimes leaps to solutions where reason can follow only slowly; if he does not, his science suffers."

"Science fiction writers foresee the inevitable, and although problems and catastrophes may be inevitable, solutions are not."

"You must keep sending work out; you must never let a manuscript do nothing but eat its head off in a drawer. You send that work out again and again, while you're working on another one. If you have talent, you will receive some measure of success - but only if you persist"

"I believe in evidence. I believe in observation, measurement, and reasoning, confirmed by independent observers. I'll believe anything, no matter how wild and ridiculous, if there is evidence for it. The wilder and more ridiculous something is, however, the firmer and more solid the evidence will have to be"

"If knowledge can create problems, it is not through ignorance that we can solve them."

"Self-education is, I firmly believe, the only kind of education there is."

"There is nothing frightening about an eternal dreamless sleep. Surely it is better than eternal torment in Hell and eternal boredom in Heaven."

"There never can be a man so lost as one who is lost in the vast and intricate corridors of his own lonely mind, where none may reach and none may save."

"The Earth faces environmental problems right now that threaten the imminent destruction of civilization and the end of the planet as a livable world. Humanity cannot afford to waste its financial and emotional resources on endless, meaningless quarrels between each group and all others. there must be a sense of globalism in which the world unites to solve the real problems that face all groups alike. "

"All the hundreds of millions of people who, in their time, believed the Earth was flat never succeeded in unrounding it by an inch."

"We're forever teetering on the brink of the unknowable, and trying to understand what can't be understood."

"Even as a youngster, though, I could not bring myself to believe that if knowledge presented danger, the solution was ignorance. To me, it always seemed that the solution had to be wisdom. You did not refuse to look at danger, rather you learned how to handle it safely."