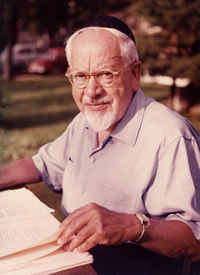 "A religion is the organized quest of a people for salvation, for helping those who live by the civilization of that people to achieve their destiny as human beings."

"The essence of religion is the human quest for salvation."

"There are, no doubt, a few who manage to acquire a high degree of modern culture and even to achieve distinction in some branches of modern knowledge without finding themselves intellectually at variance with Orthodoxy. They belong to those who see no need for welding tradition and experience into a unitary organised mental background. They willingly subscribe to the medieval principle that Torah and philosophy have nothing to do with each other, because it saves them a great deal of mental bother. But such is only a small eddy in the main current of Jewish life."

"Nineteenth-century Reform in German had aimed at the following three objectives: (1) the substitution of a rationalist attitude to tradition for the on based on unquestioning faith, (2) the elimination of those religious observances and prayers which emphasised the particularistic aspect of Judaism, and (3) the shifting of emphasis from the legalistic to the prophetic aspect of Judaism. To counteract that threefold program, Orthodoxy proposed a program of its own, which called for the following: (1) faith in the supernatural origin of the written and oral Torah, (2) maintenance of all traditional observances and forms of worship, and (3) the continuance of the study of Torah in the traditional sprit. This program was intended to rule out any possibility of compromising with modernism. In practice, however, Orthodoxy did not shut out completely all tendencies that conflicted with tradition."

"The entire style of thought in Reform bears the imprint of Protestant theology and philosophy. Jewish Orthodoxy, on the other hand, clearly reflects the style of thought characteristic of Catholic theology. That may explain in party why Orthodoxy attained its greatest strength in the Catholic part of Germany. The reaction of the Orthodox Jews against the modernist emphasis upon reason and the spirit of the times was very similar to that displayed by the Catholics among whom they lived. The spokesmen of Orthodoxy maintained that to recognise the primacy of reason was to place oneself outside of Judaism. They maintained that the authoritative character of traditional Judaism should be sufficient to validate whatever demands it makes on the Jew. Those demands, they argued, are intrinsically meant to be a challenge to whatever happens to be be the spirit of the times, rather than a concession to it. For (Rabbi) Samson Raphael Hirsch, the essence of modernity is the humanist assumption that salvation consists in the achievement of happiness and self-perfection. That assumption, according to him, is morally and spiritually untrue."

"The salvation of Judaism cannot come either from Orthodoxy or from Reform. Orthodoxy is altogether out of keeping with the march of human thought. It has no regard for the world view of the contemporary mind. Nothing can be more repugnant to the thinking man of today than the fundamental doctrine of Orthodoxy, which is that tradition is infallible. Such infallibility could be believed in as long as the human mind thought of God and revelation in semi-mythological terms. Then it was conceivable that a quasi-human being could hand down laws and histories in articulate form. Being derived from a supramundane source, these laws and histories, together with the ideas based on them, could not but be regarded as free from all the errors and shortcomings of the human mind. Whenever a tradition contradicts some facts too patent to be denied, or falls below some accepted moral standard, resort is had to artificial interpretations that flout all canons of history and exegesis. The doctrine of infallibility rules out of court all research and criticism, and demands implicit faith in the truth of whatever has come down from the past. It precludes all conscious development in thought and practice and deprives Judaism of the power to survive in an environment that permits of free contact with non-Jewish civilizations."

"Education by means of pre-fabricated ideas is propaganda."

"Just as science entered upon a new stage in its development when it replaced the deductive method with the inductive, so can religion parallel the progress of science by subjecting its own assumptions and processes to analysis."

"The aim [of education] is to develop a sincere faith in the holiness of life and sense of responsibility for enabling the... people to make its contribution to the achievement of a good life."

"I've known a lot of people who do not believe in God who have come to Judaism for other reasons, such as a relationship or a philosophical view that drew them in. One of the strange and miraculous things about Jewish practice is that it seems to engender belief. People wonder, "Why does Chabad ask passersby to put on tefillin?" It seems that there's this almost magical effect to it. The mitzvah not only provokes spiritual questions, but engenders a longing for belief, and ultimately belief itself. So even though, theologically, Judaism without God doesn't make sense, I would say that, as a practice, Judaism can begin in non-belief but conclude in belief. For me, authenticity means truth. It means connecting with a revelation that happened in the past. If there's any hope for Judaism at all, it lies in the belief that Judaism goes back to Moses and Mount Sinai. Otherwise, Judaism is just a fraud, an illusion."

"We cannot do without being needed, and without something of which we are proud. "