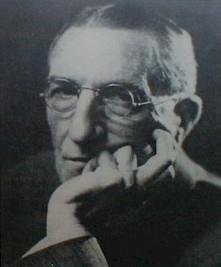 "The full-grown modern human being who seeks but refuge finds instead boredom and mental dissolution, unless he can be, even in his withdrawal, creative. He can find the quality of happiness in the strain and travail only of achievement and growth. And he is conscious of touching the highest pinnacle of fulfillment which his life-urges demand when his is consumed in the service of an idea, in the conquest of the goal pursued."

"For a male and female to live continuously together is...biologically speaking, an extremely unnatural condition."

"No myth of miraculous creation is so marvelous as the face of man's evolution."

"Any agreement where the male provides a current benefit in return for a promise of future association is null and void as soon as the male has provided the benefit (see corollary 1)."

"Democracy is the worst form of government. It is the most inefficient, the most clumsy, the most unpractical.... It reduces wisdom to impotence and secures the triumph of folly, ignorance, clap-trap, and demagogy.... Yet democracy is the only form of social order that is admissible, because it is the only one consistent with justice."

"For Although there is not a single aspect of European growth in which the decisive influence of Islamic Culture is not traceable, nowhere is it so clear and momentous as in the genesis of that power which constitutes the permanent distinctive force of the modern world, and the supreme source of its victory, natural science and the scientific spirit."

"In the past decade or so, the women's magazines have taken to running home-handyperson articles suggesting that women can learn to fix things just as well as men. These articles are apparently based on the ludicrous assumption that _men_ know how to fix things, when in fact all they know how to do is _look_ at things in a certain squinty-eyed manner, which they learned in Wood Shop; eventually, when enough things in the home are broken, they take a job requiring them to transfer to another home."

"It is highly probable that but for the Arabs, modern European civilization would never have arisen at all; it is absolutely certain that but for them, it would not have assumed that character which has enabled it to transcend all previous phases of evolution."

"It was under the influence of the Arabs and Moorish revival of culture and not in the 15th century, that a real renaissance took place. Spain, not Italy, was the cradle of the rebirth of Europe. After steadily sinking lower and lower into barbarism, it had reached the darkest depths of ignorance and degradation when cities of the Saracenic world, Baghdad, Cairo, Cordova, and Toledo, were growing centers of civilization and intellectual activity. It was there that the new life arose which was to grow into new phase of human evolution. From the time when the influence of their culture made itself felt, began the stirring of new life."

"It was under their successors at Oxford School (that is, successors to the Muslims of Spain) that Roger Bacon learned Arabic and Arabic Sciences. Neither Roger Bacon nor later namesake has any title to be credited with having introduced the experimental method. Roger Bacon was no more than one of apostles of Muslim Science and Method to Christian Europe; and he never wearied of declaring that knowledge of Arabic and Arabic Sciences was for his contemporaries the only way to true knowledge. Discussion as to who was the originator of the experimental method....are part of the colossal misinterpretation of the origins of European civilization. The experimental method of Arabs was by Bacon's time widespread and eagerly cultivated throughout Europe."

"Past benefit provided by the male does not provide for continued or future association."

"Science is the most momentous contribution of Arab civilization to the modern world; but its fruits were slow in ripening. Not until long after Moorish culture had sunk back into darkness did the giant, which it had given birth to, rise in his might. It was not science only which brought Europe back to life. Other and manifold influence from the civilization of Islam communicated its first glow to European Life."

"The debt of our science to that of the Arabs does not consist in startling discoveries or revolutionary theories, science owes a great deal more to Arab culture, it owes its existence. The Astronomy and Mathematics of the Greeks were a foreign importation never thoroughly acclimatized in Greek culture. The Greeks systematized, generalized and theorized, but the patient ways of investigation, the accumulation of positive knowledge, the minute method of science, detailed and prolonged observation and experimental inquiry were altogether alien to the Greek temperament. Only in Hellenistic Alexandria was any approach to scientific work conducted in the ancient classical world. What we call science arose in Europe as a result of new spirit of enquiry, of new methods of experiment, observation, measurement, of the development of mathematics, in a form unknown to the Greeks. That spirit and those methods were introduced into the European world by the Arabs."

"The effects of infantile instruction are, like those of syphilis, never completely cured."

"The female, not the male, determines all the conditions of the animal family. Where the female can derive no benefit from association with the male, no such association takes place."

"The old fellow who was cadging drinks from me the other night at the Cafe Royal told me he had known Julian Bern's people in the old days at Rome."