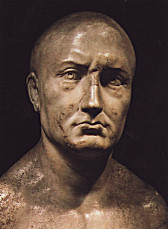 Roman General and Statesman who saved Rome from Hannibal

"I am mindful of human weakness, and I reflect upon the might of Fortune and know that everything that we do is exposed to a thousand chances. But, just as I should admit that I were acting with arrogance and violence if, before I had crossed over to Africa, I were to reject you when you were voluntarily withdrawing from Italy and, while your army was already on shipboard, you were coming in person to sue for peace, so now, when I have dragged you to Africa, resisting and shifting ground as we almost came to blows, I am under no obligation to respect you. Therefore, if to the terms upon which peace was formerly about to be made, as it seemed, you are adding some kind of compensation for the ships loaded with supplies that were taken by force during the armistice, and for violence done to my envoys, I have reason to bring it before the council. But if that addition also seems too severe, prepare for war, since you have been unable to endure a peace."

"I am aware of the frailty of man, I think about the power of fortune, and I know that all our actions are at the mercy of a thousand vicissitudes. Now I admit that it would have been arrogant and headstrong reaction on my part if you had come to sue for peace before I crossed to Africa, and I had rejected your petition when you were yourself voluntarily quitting Italy, and had your troops embarked on your ships. But, as it is, I have forced you back to Africa, and you are reluctant and resisting almost to the point of fighting, so that I feel no need to show you any consideration. Accordingly, if something is actually added to the terms on which it seems probable that a peace could be concluded ? some sort of indemnity for the forceful appropriation of our ships, along with their cargoes, during truce and for the violation of our envoys ? then I have something to take to my council. But if you consider even that to be excessive, prepare for war, for you have found peace intolerable."

"I would gladly take her if I were a private and not a commander."

"It is the part of a fool to say, I should not have thought."

"Let us make war, since evidently, you have found peace intolerable."

"There is not one of these men who would not go up to the top of that tower and throw himself down head first at my command."

"Ungrateful fatherland, not even my bones shalt thou have! [Epitaph he had placed on his tomb]"