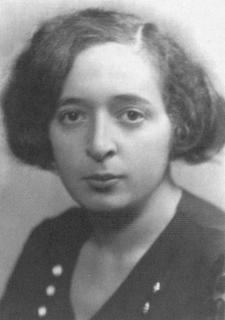 German-American Writer, Editor of Jewish Spectator, Scholar and Feminist Activist, Co-founder of the School of the Jewish Woman in New York

"The tragedy of modern Jewish life is not anti-Semitism, but the loss of the sense of the worthwhileness of being a Jew."

"Unlike Christian-Jewish dialogue, whose sour grapes have set our teeth on edge, Jewish-Muslim dialogue will be fruitful. Certainly it will serve notice on the Arabs that their Jewish “cousins” have broken out of their Western provincialism. If henceforth Jews will assign to Jewish-Muslim dialogue the importance that is its due, the Arabs, in whose nationalism religion is as important as it is in Jewish nationalism, will eventually – and perhaps sooner than cold-headed realists will dare expect – rediscover that the Jews are their brothers, descendants of Abraham’s second son. "

"Acute political interests and emergencies tend to unite even the most unlikely partners in strange bed-fellowships. Permanent and solid alliances, however, are usually concluded on the strength of long-range identical goals predicated upon and rooted in similarities and identities of ideologies, cultures and, also, religious affinities."

"Israel will never be able to secure its frontiers by force of arms and with the aid of the United States and the United Nations. The road which will lead Israel to peace with its Arab neighbors is not the path of “coexistence,” but of a cultural symbiosis in which once again, as in the past, Jewish culture and Arab culture will blend and coalesce, while yet retaining their unique and distinct qualities. Once the spirit of understanding and symbiosis will have been initiated, there will also come about a change in attitude in the realm of politics. There is needed a program for initiating Jewish-Muslim dialogue as the preparation for the renewal of Arab-Jewish symbiosis in today’s Middle East. "

"Dialogue, if it is not to degenerate into diatribe and disputation, too, presupposes similarities, identities and affinities. In their absence dialogue, as distinguished from diatribe and disputation, cannot emerge. This is amply attested by the failure of Catholic-Jewish dialogue in the post-Vatican II era. Despite concerted efforts by Jews and Catholics of good will and scholarship, what has taken place at Catholic-Jewish dialogues thus far is proof that when partners to a dialogue are as far apart as Catholicism and Judaism, the difference will preclude the climate of harmony for lack of which “interfaith conversations” turn into diatribes. Augustin Cardinal Bea’s commentary on the Vatican II declaration on Jews and Judaism is proof that Catholic-Jewish dialogue remains as problems-beset after the Council as it was previously. "

"The failure of Judaism and the Jews to achieve a viable and creative existence (viable physically and spiritually) in the Western world stems from the differentness of Jewishness as an organic fusion of religion, peoplehood and a distinctive national civilization. Basically, the attitude of the Western countries to their Jewish minorities has remained that which inspired Napoleon’s Emancipation formula, namely “to the Jews as persons – everything, but as a people – nothing.”"

"The Jewish-Muslim symbiosis could develop because the mainstream of Islam is tolerant of Jews and Judaism. To be sure, there are hate-inspired utterances about Jews in the Kur’an and its commentaries, but compared to the Christian denunciations they are mild. Notwithstanding Islam’s theological disapproval of its mother and the restrictions imposed upon “infidels” (Christians as well as Jews), there were no pogroms under Muslim rule until Zionism’s identification with “Western civilization” alienated the Arabs, for whom “Western civilization” is synonymous with Christianity and colonialism. The isolated cases of pre-modern persecution of Jews by Muslims were inspired by short-lived sectarian groups. "

"In the same way as Judaism, Islam is the total claim of a total national civilization. In Islam, too, religion and state are constitutionally one and a complete separation is impossible. Some Arabs are as reluctant as are some modern Israelis to submit to the enforcement of religious law by government. However, like Israel, the Arab states are committed to the classical Islamic affirmation that Islam and the Arab state are inseparable. But there are groups in all Arab states which advocate, if not complete separation of religion and state, at least a greater accommodation of Islamic law to modernity and individual freedom."

"If the young State of Israel is to survive and prosper it must become integrated into the Arab world and be accepted by its neighbors. The crucial challenge confronting Israel is how to conclude an alliance of peace with the Arab nations. We believe that with a complete reorientation, especially a muting of the insistent harping on the theme of “Israel is an outpost of Western civilization” the Arab nations would accept Israel on the basis of the kinship which unites Jews and Arabs."

"If there is to be “dialogue” between Israel ad the Arab countries, Israel will have to project a new image of herself-the image of a Semitic brother-state in the midst of Semitic brother-states. Instead of proclaiming itself “the outpost of Western civilization,” Israel should emphasize that Hebrew is a Semitic language and a sister-language of Arabic. The setting of the Hebrew Bible and the Talmud is not Europe but the Near East-its deserts and its fruitful regions. The biblical ideal of feminine beauty is not the Western dream. It is “the dark and comely beloved” of “Song of Songs,” who is swarthy as “the tents of Kedar” and –as Arab tents are to this day."

"The identity of Jewish and Muslim fate and suffering at the hands of Christians, during the Crusades and in Spain, has not received sufficient attention. It was a period of shared agony and confrontation with a common enemy. This deserves to be better known by Jews and Muslims. The shared fate of oppression and persecution under “Christianity triumphant” is a strong bond of Jewish-Muslim brotherhood. "