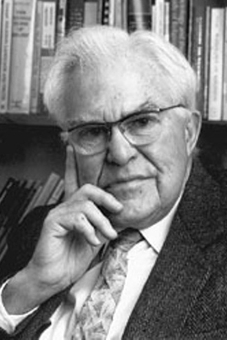 "Faith is deeper, richer, more personal. It is engendered by a religious tradition, in some cases and to some degree by its doctrines; but it is a quality of the person not of the system. It is an orientation of the personality, to oneself, to one’s neighbor, to the universe; a total response; a way of seeing whatever one sees and of handling whatever one handles; a capacity to live at more than a mundane level; to see, to feel, to act in terms of, a transcendent dimension."

"Faith, then, is a quality of human living. At its best it has taken the form of serenity and courage and loyalty and service; a quiet confidence and joy which enable one to feel at home in the universe, and to find meaning in the world and in one’s own life, a meaning that is profound and ultimate, and is stable no matter what may happen to oneself at the level of immediate event. Men and women of this kind of faith face catastrophe and confusion, affluence and sorrow, unperturbed; face opportunity with conviction and drive; and face others with cheerful charity."

"One's own 'religion' may be piety and faith, obedience, worship, and a vision of God. An alien 'religion' is a system of beliefs or rituals, an abstract and impersonal pattern of observables. A dialectic ensues, however. If one's own 'religion' is attacked, by unbelievers who necessarily conceptualize it schematically, or all religion is, by the indifferent, one tends to leap to the defence of what is attacked, so that presently participants of a faith - especially those most involved in argument - are using the term in the same externalist and theoretical sense as their opponents. Religion as a systematic entity, as it emerged in the seventeenth and eighteenth centuries, is a concept of polemics and apologetics."

"I find the religious diversity of the world almost bewilderingly complex. The more I study, the more variegated I find the religious scene to be. I have no reason to urge a thesis of unity among 'the religions of the world'. As a matter of fact, I do not find unity even within one so-called 'religion', let alone among all.... It is not the case that all religions are the same. The historian notes that not even one religion is the same, century after century, or from one country to another, or from village to city.... I repeat: it is not the case that all religions are the same. Moreover, if a philosopher asks (anhistorically) what they all have in common, he or she either finds the answer to be 'nothing', or finds that they all have in common something so much less than each has separately as to distort or to evacuate the individual richness and depth and sometimes grotesqueness of actual religious life."

"The long-range transformation may be characterized perhaps most dramatically thus. There was a time when “I believe” as a ceremonial declaration of faith meant, and was heard as meaning: “Given the reality of God, as a fact of the universe, I hereby proclaim that I align my life accordingly, pledging love and loyalty.” A statement about a person’s believing has now come to mean, rather, something of this sort: “Given the uncertainty of God, as a fact of modern life, so-and-so reports that the idea of God is part of the furniture of his mind.”"

"In universities, those who were in pursuit of truth have to a significant extent been followed by those in pursuit of research grants, or of promotions. Truth itself, as the proclaimed goal of a university, has largely been reduced from something that we serve to something that serves us; from something to which we aspire to something that we construct. The academic enterprise then becomes the knowledge industry: the instrument by which a society turns out knowledge as it turns out motor cars, for consumption and for our own profit or pleasure or aggrandizement. Socrates’s ‘knowledge is virtue’ has been widely replaced by Bacon’s ‘knowledge is power’. Rationalism in the sense of a disciplined subservient dedication of oneself to the rule of transcendent Reason, has been largely replaced by a new rationalism that is concerned rather and only with the appropriateness of instrumental means to unscrutinized ends. Classically, Europe had held that to seek what is not morally good is as irrational as to think what is not intellectually true."

"My faith is an act that I make, myself, naked before God. Just as there is no such thing as Christianity (or Islam or Buddhism) . . . behind which the Christian (the Muslim, the Buddhist) may shelter, which he may set between himself and the terror and splendor and living concern of God, so there is no generic Christian faith, no ‘Buddhist faith’, no ‘Hindu faith’, no ‘Jewish faith’. There is only my faith and yours, and that of my Shinto friend, or my particular Jewish neighbor."

"Modern “believing” . . . is placed in relation to, contra-distinction from, knowing. Let us consider this briefly, for everyday usage. For the man in the street, may we not say that knowledge involves two things: (a) certitude, and (b) correctness, in what one knows. To use quite unsophisticated terms, in ordinary parlance one knows whatever one knows when there is a close positive relation of one’s ideas both to the inner conviction and to objective truth. At this same level . . . there is the common-sense notion of believing. This is similar to knowing in that it is thought of as conceptualist, as in the realm of ideas in one’s mind (even, of propositions). It differs from knowing in that it involves one or other of again two things, and perhaps both: (a) lack of certitude; (b) open neutrality as to the correctness or otherwise of what is believed. "

"For Christians to think that Christianity is true, or final, or salvific, is a form of idolatry... Our conclusion, then, is this. In comparative perspective, one sees that 'idolatry' is not a notion that clarifies other religious practices or other outlooks than one's own; yet it can indeed clarify with some exactitude one's own religious stance, if one has previously been victim of the misapprehension that the divine is to be fully identified with or within one's own forms. Christians have been wrong in thinking that Hindus are formally idolaters. We would do well, on the other hand, to recognize that we Christians have substantially been idolaters, insofar as we have mistaken for God, or as universally final, the particular forms of Christian life or thought. Christianity --for some, Christian theology--has been our idol. It has had both the spiritual efficacy of 'idols' in the good sense, and serious limitations of idolatry in the bad sense."

"That their several histories, individually already complex, can be understood, and indeed can be understood better, and in the end can be understood only, in terms of each other: as strands in a still more complex whole. What they have in common is that the history of each has been what it has been in significant part because the history of the others has been what it has been. This truth is newly discovered; yet truth it is, truth it has throughout been. Things proceeded in this interrelated way for many centuries without humanity’s being aware of it; certainly not fully aware of it. A new, and itself interconnected, development is that currently humankind is becoming aware of it, in various communities."

"A quality of the person and not the system. It is an orientation of the personality to oneself, to one’s neighbor, to the universe; a total response; a way of seeing whatever one sees and of handling whatever one handles; a capacity to live at more than a mundane level; to see, to feel, to act in terms of, a transcendent dimension."

"Muslims will allow attacks on Allah: there are atheists and atheistic publications and rationalistic societies, but to disparage Muhammad will provoke from even the most liberal sections of the community a fanaticism of blazing vehemence."

"Beyond the forms there is . . . the intimation of a transcending, limitless truth. This infinite becomes in part available to us within the finite, through these finite channels that a society inherits and cherishes, and uses to express its faith and to nourish it. Can we learn something of that faith, and appreciate in part that inner meaning, by exploring the significance of these outward forms?"

"The sustained inability to clarify what the word 'religion' signifies, in itself suggests that the term ought to be dropped; that it is a distorted concept not really corresponding to anything definite or distinctive in the objective world. The phenomena we call religious undoubtedly exist. Yet perhaps the notion that they constitute in themselves some distinctive entity is an unwarranted analysis... an alternative suggestion could be that a failure to agree on definitions of religion may well stem from the quality of the material. For what a man thinks about religion is central to what he thinks about life and the universe as a whole. The meaning that one ascribes to the term is a key to the meaning that one finds in existence."

"To hold that our one-worldedness is bringing all humanity together in such a way that every one of us is being caught up in the processes of all."

"Some of you will perhaps say that surely we can get on with the business of political structures, of economic planning, of technical advance, of strategic defense, without raising "extraneous" issues of religious faith or cultural convictions: issues that may be interesting in themselves, but are irrelevant to secular concerns. This division of life into two spheres, religious and secular, is a characteristically Western pattern. We tend to assume that everyone else will share it . . . that the problem of building a new world order is that of imposing Western civilization on the world. . . Fortunately there has been some recognition, though belated and partial, that the nineteenth-century solution of Western domination by force must be abandoned . . . and along with it] the arrogance of cultural superiority. . . The new world that is waiting to be born is a world of cultural pluralism, of diverse faith. . . Let no one imagine that building the new world community will be easy. . . Is this possible? . . . I do not know, [but it is] the fundamental challenge facing humanity today; whether we shall rise to it or not remains to be seen. My own faith is that it can be achieved."