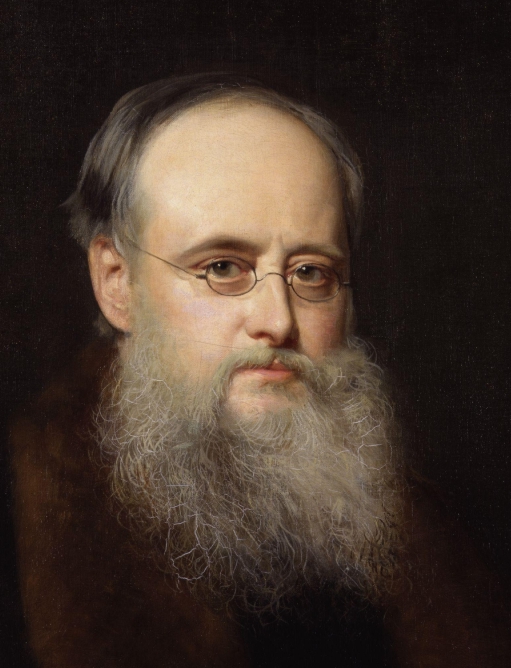 "Peace rules the day, where reason rules the mind."

"Pedants, who have the least knowledge to be proud of, are impelled most by vanity."

"We neither (never) know nor judge ourselves; others may judge, but cannot know us; God alone judges, and knows too."

"A drop of tea is to a woman's tongue what a drop of oil is to a wasting lamp."

"A man who eats a plain joint is only one remove from a cannibal - or a butcher."

"A very remarkable work... in the present state of light literature in England - a novel that actually tells a story... it has another extraordinary merit - it isn't written by a woman."

"A man with delicately-strung nerves often says and does things which often lead us to think more meanly of him than he deserves. It is his great misfortune constantly to present himself at his worst. On the other hand, a man provided with nerves vigorously constituted, is provided also with a constitutional health and a hardihood wich express themselves brightly in his manners, and which lead to a mistaken impression that his nature is what it appears to be on the surface. Having good health, he has good spirits. Having good spirits, he wins as an agreeable companion on the persons with whom he comes in contact - although he may be hiding all the while, under an outer covering which is physically wholesome, an inner nature which is morally diseased."

"All women have a claim on us."

"Always distrust a man's last wishes on his death-bed - unless they are communicated to his lawyer, and expressed in his will."

"And earth was heaven a little the worse for wear. And heaven was earth, done up again to look like new."

"Any woman who is sure of her own wits, is a match, at any time, for a man who is not sure of his own temper."

"Are there, infinitely varying with each individual, inbred forces of Good and Evil in all of us, deep down below the reach of mortal encouragement and mortal repression -- hidden Good and hidden Evil, both alike at the mercy of the liberating opportunity and the sufficient temptation?"

"Ask yourself if there is any explanation of the mystery of your own life and death."

"At my age...nothing is serious except indigestion."

"A woman's courage rises with the greatness of the emergency."

"Ah! I am a bad man, Lady Glyde, am I not? I say what other people only think, and when all the rest of the world is in a conspiracy to accept the mask for the true face, mine is the rash hand that tears off the plump pasteboard and shows the bare bones beneath."

"After a child or two, that sort runs to fat, and you find you have married more of her than you bargained for."

"At the age when we are all of us most apt to take our coloring, in the form of a reflection from the coloring of other people, he had been sent abroad, and had been passed on from one nation to another, before there was time for any one coloring more than another to settle itself on him firmly. As a consequence of this, he had come back with so many different sides to his character, all more or less jarring with each other, that he seemed to pass his life in a state of perpetual contradiction with himself. He could be a busy man, and a lazy man; cloudy in the head, and clear in the head; a model of determination, and a spectacle of helplessness, all together. He had his French side, and his German side, and his Italian side--the original English foundation showing through, every now and then, as much as to say, Here I am, sorely transmogrified, as you see, but there's something of me left at the bottom of him still."

"Blindness is never bashful, for the one simple reason that that blindness cannot see."

"Books - the generous friends who met me without suspicion - the merciful master who never used me ill!"

"But the Law is still, in certain inevitable cases, the pre-engaged servant of the long purse."

"But then I am a lawyer, and my business is to make a fuss about trifles."

"But, ah me! Where is the faultless human creature who can persevere in a good resolution, without sometimes failing and falling back?"

"Cooked to a degree of imperfection only attained in an English kitchen."

"Did you ever know a woman who could resist looking out of a window?"

"Doors and listeners have a knack of getting together."

"Every human institution (justice included) will stretch a little, if you only pull it the right way."

"Fell headlong into the bottomless abyss of the English Law."

"Habits of literary composition are perfectly familiar to me. One of the rarest of all the intellectual accomplishments that a man can possess is the grand faculty of arranging his ideas. Immense privilege! I possess it. Do you?"

"Have you ever heard of such a thing as the fascination of terror?"

"He is at the head of his profession.....- and he knows no more about it than I do. The great physician has just gone away with two guineas in his pocket. One guinea for advising me to keep her quiet; another guinea for telling me to trust to time."

"Here follows the substance of what I said, written out entirely for your benefit. Pay attention to it, or you will be all abroad, when we get deeper into the story. Clear your mind of the children, or the dinner, or the new bonnet, or what not. Try if you can't forget politics, horses, prices in the city and grievances at the club. I hope you won't take this freedom on my part amiss; it's only a way I have of appealing to a gentle reader. Lord! Haven't I seen you with the greatest authors in your hands, and don't I know how ready your attention is to wander when it's a book that asks for it, instead of a person?"

"How often we feel and know, either pleasurably or painfully, that another is looking on us, before we have ascertained the fact with our own eyes! How often we prophesy truly to ourselves the approach of friend or enemy just before either has really appeared! How strangely and abruptly we become convinced, at a first introduction, that we shall secretly love this person and loathe that, before experience has guided us with a single fact in relation to their characters!"

"Husbands and wives talk of the cares of matrimony, and bachelors and spinsters bear them."

"I agree with the late William Cobbett about picking a wife. See that she chews her food well and sets her foot down firmly on the ground when she walks, and you're all right. Selina Goby was all right in both these respects, which was one reason for marrying her. I had another reason, likewise, entirely of my own discovering. Selina, being a single woman, made me pay so much a week for her board and services. Selina, being my wife, couldn't charge for her board, and would have to give me her services for nothing. That was the point of view I looked at it from. Economy - with a dash of love."

"I am (thank God) constitutionally superior to reason."

"I am a bundle of nerves dressed up to look like a man!"

"I am a citizen of the world, and I have met, in my time, with so many different sorts of virtue, that I am puzzled, in my old age, to say which is the right sort and which is the wrong."

"I am an average good Christian, when you don't push my Christianity too far. And all the rest of you–which is a great comfort–are, in this respect, much the same as I am."

"I am not against hasty marriages where a mutual flame is fanned by an adequate income."

"I am not rich enough to care about money."

"I am thinking,’ he remarked quietly, ’whether I shall add to the disorder in this room, by scattering your brains about the fireplace."

"I have always held the old-fashioned opinion that the primary object of work of fiction should be to tell a story."

"I have always maintained that the one important phenomenon presented by modern society is - the enormous prosperity of Fools."