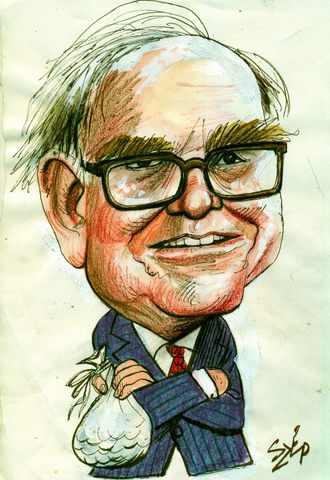 "Diversification is a protection against ignorance. It makes little sense for those who know what they're doing."

"It takes 20 years to build a reputation and five minutes to ruin it. If you think about that, you'll do things differently."

"Risk comes from not knowing what you're doing."

"A great investment opportunity occurs when a marvelous business encounters a one-time huge, but solvable problem."

"A hyperactive stock market is the pickpocket of enterprise."

"A public opinion poll is no substitute for thought."

"A story that was passed down from Ben Graham illustrates the lemminglike behavior of the crowd: "Let me tell you the story of the oil prospector who met St. Peter at the Pearly Gates. When told his occupation, St. Peter said, “Oh, I’m really sorry. You seem to meet all the tests to get into heaven. But we’ve got a terrible problem. See that pen over there? That’s where we keep the oil prospectors waiting to get into heaven. And it’s filled—we haven’t got room for even one more.” The oil prospector thought for a minute and said, “Would you mind if I just said four words to those folks?” “I can’t see any harm in that,” said St. Pete. So the old-timer cupped his hands and yelled out, “Oil discovered in hell!” Immediately, the oil prospectors wrenched the lock off the door of the pen and out they flew, flapping their wings as hard as they could for the lower regions. “You know, that’s a pretty good trick,” St. Pete said. “Move in. The place is yours. You’ve got plenty of room.” The old fellow scratched his head and said, “No. If you don’t mind, I think I’ll go along with the rest of ’em. There may be some truth to that rumor after all.""

"Always invest for the long term."

"An educational approach to money and investing struck me as a very good idea. People do form behavior habits very young on matters of money. I get calls every day from people who are in a financial hole."

"After careful consideration, the board decided that a change in management is in the best interest of the company's shareholders."

"After all, you only find out who is swimming naked when the tide goes out."

"An irresistible footnote: in 1971, pension fund managers invested a record 122% of net funds available in equities - at full prices they couldn't buy enough of them. In 1974, after the bottom had fallen out, they committed a then record low of 21% to stocks."

"An investor should act as though he had a lifetime decision card with just twenty punches on it."

"Anything can happen in stock markets and you ought to conduct your affairs so that if the most extraordinary events happen, that you’re still around to play the next day."

"An investor cannot obtain superior profits from stocks, by simply committing to a specific investment category or style."

"An investor needs to do very few things right as long as he or she avoids big mistakes."

"An investor should ordinarily hold a small piece of an outstanding business with the same tenacity that an owner would exhibit if he owned all of that business."

"As a group, lemmings have a rotten image, but no individual lemming has ever received bad press."

"As Buffet said in the speech, “He’s not looking at quarterly earnings projections, he’s not looking at next year’s earnings, he’s not thinking about what day of the week it is, he doesn’t care what investment research from any place says, he’s not interested in price momentum, volume or anything. He’s simply asking: What is the business worth?"

"As far as you are concerned, the stock market does not exist. Ignore it."

"As a short seller, you could run out of money, before the promoter runs out of ideas."

"As the old saying goes, what the wise man does in the beginning, fools do in the end."

"Bad habits are like chains that are too light to feel until they are too heavy to carry."

"Berkshire Hathaway will sell you insurance, carpeting or any of our other products in exchange for options identical to those you grant yourselves."

"Ben [Graham]'s Mr. Market allegory may seem out-of-date in today's investment world, in which most professionals and academicians talk of efficient markets, dynamic hedging and betas. Their interest in such matters is understandable, since techniques shrouded in mystery clearly have value to the purveyor of investment advice. After all, what witch doctor has ever achieved fame and fortune by simply advising "Take two aspirins"?"

"Berkshire’s arbitrage activities differ from those of many arbitrageurs. First, we participate in only a few, and usually very large, transactions each year. Most practitioners buy into a great many deals perhaps 50 or more per year. With that many irons in the fire, they must spend most of their time monitoring both the progress of deals and the market movements of the related stocks. This is not how Charlie nor I wish to spend our lives. (What’s the sense in getting rich just to stare at a ticker tape all day?)"

"Asset allocation put out by Wall Street – 65% in stocks, a certain percentage in bonds and cash – is total nonsense."

"Berkshire's board has fully discussed each of the three CEO candidates and has unanimously agreed on the person who should succeed me if a replacement were needed today. The directors know now - and will always know in the future - exactly what they will do when the need arises."

"But a pin lies in wait for every bubble. And when the two eventually meet, a new wave of investors learns some very old lessons: First, many in Wall Street æ a community in which quality control is not prized as will sell investors anything they will buy. Second, speculation is most dangerous when it looks easiest."

"But now for the final exam: If you expect to be a net saver during the next five years, should you hope for a higher or lower stock market during that period? Many investors get this one wrong. Even though they are going to be net buyers of stocks for many years to come, they are elated when stock prices rise and depressed when they fall. In effect, they rejoice because prices have risen for the "hamburgers" they will soon be buying. This reaction makes no sense. Only those who will be sellers of equities in the near future should be happy at seeing stocks rise. Prospective purchasers should much prefer sinking prices."

"Bill Gates and I kind of cooked it up together. We hope we could get a school program someplace, where the kids were taught the game and . . . develop a lot of competition between schools."

"Buy companies with strong histories of profitability and with a dominant business franchise."

"By the age of 10, I’d read every book in the Omaha Public Library with the word finance in the title – some twice."

"Can you really explain to a fish what it’s like to walk on land? One day on land is worth a thousand years of talking about it, and one day running a business has exactly the same kind of value."

"Calculate "owner earnings" to get a true reflection of value."

"Cash combined with courage in a crisis is priceless."

"Cash never makes us happy, but it’s better to have the money burning a hole in Berkshires pocket than resting comfortably in someone else’s."

"Chains of habit are too light to be felt until they are too heavy to be broken."

"Charlie and I believe that those entrusted with handling the funds of others should establish performance goals at the onset of their stewardship. Lacking such standards, managements are tempted to shoot the arrow of performance and then paint the bull's-eye around wherever it lands. In Berkshire's case, we long ago told you that our job is to increase per-share intrinsic value at a rate greater than the increase (including dividends) of the S&P 500. In some years we succeed; in others we fail. But, if we are unable over time to reach that goal, we have done nothing for our investors, who by themselves could have realized an equal or better result by owning an index fund."

"Charlie and I decided long ago that in an investment lifetime it's too hard to make hundreds of smart decisions. That judgment became ever more compelling as Berkshire's capital mushroomed and the universe of investments that could significantly affect our results shrank dramatically. Therefore, we adopted a strategy that required our being smart - and not too smart at that - only a very few times. Indeed, we'll now settle for one good idea a year. (Charlie says it's my turn.)"