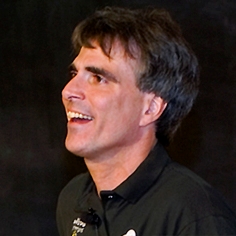 "A parent’s job is to encourage kids to develop a joy for life and a great urge to follow their own dreams. The best we can do is help them develop a personal set of tools for the task."

"A professor’s job is to teach students how to see their minds growing the same way they can see their muscles grow when they look in a mirror… Getting people to welcome feedback was the hardest thing I ever had to do as an educator… too much stroking, too little real feedback."

"Don’t obsess over what people think. If nobody ever worried about what was in other people’s head, we’d all be 33 percent more effective in our lives and on our jobs."

"Look for the best in everybody. It you wait long enough, people will surprise and impress you. When you are frustrated with people when they’ve made you angry, it just may be because you haven’t given them enough time. In the end, people will show you their good side."

"Pay it forward. Go out and do for others what somebody did for you."

"Even fairy-tale moments have risks."

"Don’t complain. Just work harder. We all have finite time and energy. Any time we spend whining is unlikely to help us achieve our goals. And it won’t make us happier."

"Sometimes all you have to do is ask."

"Show gratitude… with pen and paper. Handwritten notes will be appreciated."

"Treat the disease, not the symptom."

"Whatever news we get about the scans, I’m not going to die when we hear it. I won’t die the next day, or the day after that, or the day after that. So today, right now, well this is a wonderful day. And I want you to know how much I am enjoying it… That’s the way the rest of my life would need to be lived."

"We cannot change the cards we are dealt, just how we play the hand."

"A lot of people want a shortcut. I find the best shortcut is the long way, which is basically two words: work hard."

"Advice is very easy to give, and even easier not to follow, so I don't fool with it."

"All my adult life I've felt drawn to ask long-married couples how they were able to stay together. All of them said the same thing: We worked hard at it."

"Be good at something. It makes you valuable. Have something to bring to the table, because that will make you more welcome."

"Apologise when you screw up and focus on other people, not on yourself."

"Another way to be prepared is to think negatively. Yes, I'm a great optimist. But, when trying to make a decision, I often think of the worst case scenario. I call it 'the eaten by wolves factor.' If I do something, what's the most terrible thing that could happen? Would I be eaten by wolves? One thing that makes it possible to be an optimist, is if you have a contingency plan for when all hell breaks loose. There are a lot of things I don't worry about, because I have a plan in place if they do."

"Call home at least once a week. It's a proven fact that we call home less the older we get. And that's wrong. It should be the other way around. As we get older, our parents get older."

"Be prepared. Luck is truly where preparation meets opportunity."

"Believe nothing a man tells you and everything he shows you....(Taken from a farewell video from a dying father to his infant daughter on dating)"

"Complaining does not work as a strategy. We all have finite time and energy. Any time we spend whining is unlikely to help us achieve our goals. And it won't make us happier."

"Do not tell people how to live their lives. Just tell them stories. And they will figure out how those stories apply to them."

"If I work hard enough, there will be things I can do tomorrow that I can't do today. "

"Not everything needs to be fixed. "

"Experience is what you get when you didn't get what you wanted. And experience is often the most valuable thing you have to offer."

"On April 11, 1945, my father’s infantry company was attacked by German forces, and in the early stages of battle, heavy artillery fire led to eight casualties. According to the citation: With complete disregard for his own safety, Private Pausch leaped from a covered position and commenced treating the wounded men while shells continued to fall in the immediate vicinity. So successfully did this soldier administer medical attention that all the wounded were evacuated successfully. In recognition of this, my dad, then twenty-two years old, was issued the Bronze Star for valor. In the fifty years my parents were married, in the thousands of conversations my dad had with me, it had just never come up. And so there I was, weeks after his death, getting another lesson from him about the meaning of sacrifice—and about the power of humility. "

"Find the best in everybody. Just keep waiting no matter how long it takes. No one is all evil. Everybody has a good side, just keep waiting, it will come out."

"I don’t believe in the no-win scenario. "

"Get a feedback loop and listen to it. Your feedback loop can be this dorky spreadsheet thing I did, or it can just be one great man who tells you what you need to hear. The hard part is the listening to it."

"Focus on other people, not on yourself."

"Follow your passions, believe in karma, and you won't have to chase your dreams, they will come to you."

"Having been selected to be an author in the World Book, I now believe that Wikipedia is a perfectly fine source for your information, because I know what the quality control is for real encyclopedias — they let me in."

"Give yourself permission to dream. Fuel your kids' dreams too. Once in a while, that might even mean letting them stay up past their bedtimes."

"Have something to bring to the table, because that will make you more welcome."

"Here's what I know: Time must be explicitly managed, like money. You can always change your plan, but only if you have one. Ask yourself: Are you spending your time on the right things? Develop a good filing system. Rethink the telephone. Delegate. Take a time out. Time is all you have. And you may find one day that you have less than you think."

"My dad had fought in World War II in the Battle of the Bulge, and when we were going through his things [after he died], we found out he had been awarded the Bronze Star for Valor. My mom didn't know it. In 50 years of marriage it had just never come up. "

"I have never thought of writing as hard work, but I have worked hard to find a voice."

"I know you're smart. But everyone here is smart. Smart isn't enough. The kind of people I want on my research team are those who will help everyone feel happy to be here."

"I probably got more from that dream and not accomplishing it than I got from any of the ones that I did accomplish."

"He had a fantastic device. When I was a kid, fascinated me as to each planet carries one gadget, a communicator from Star Trek, through which can talk to the rest of the crew. Today I wear something like that in your pocket. And who remembers that we are the first to demonstrate Kirk cell phone? "